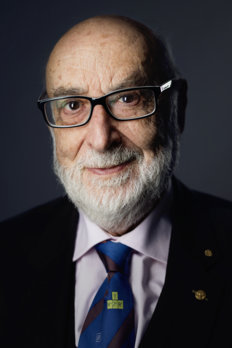 Belgian theoretical physicist, professor emeritus at the Université libre de Bruxelles (ULB) where he is member of the Service de Physique Théorique. He was awarded the 2013 Nobel Prize in Physics "for the theoretical discovery of a mechanism that contributes to our understanding of the origin of mass of subatomic particles, and which recently was confirmed through the discovery of the predicted fundamental particle, by the ATLAS and CMS experiments at CERN's Large Hadron Collider".

According to modern physics, matter consists of a set of particles that act as building blocks. Between these particles lie forces that are mediated by another set of particles. A fundamental property of the majority of particles is that they have a mass. Independently of one another, in 1964 both Peter Higgs and the team of François Englert and Robert Brout proposed a theory about the existence of a particle that explains why other particles have a mass. In 2012, two experiments conducted at the CERN laboratory confirmed the existence of the Higgs particle.