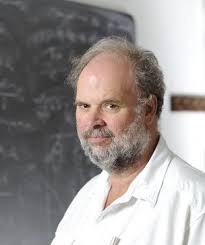 1990 Fields Medal
New Zealand mathematician. Professor Emeritus in UC Berkeley and Professor of Mathematics in Vanderbilt University. He was awarded a Fields Medal in 1990 for his work on von Neumann algebras and knot polynomials.

In 1984 Jones discovered an astonishing relationship between von Neumann algebras and geometric topology. As a result, he found a new polynomial invariant for knots and links
in 3-space. His invariant had been missed completely by topologists, in spite of intense activity in closely related areas during the preceding 60 years, and it was a complete surprise. As time went on, it became clear that his discovery had to do in a bewildering variety of ways with widely separated areas of mathematics and physics .... These included (in addition to knots and links) that part of statistical mechanics having to do with exactly solvable models, the very new area of quantum groups, and also Dynkin diagrams and
the representation theory of simple Lie algebras. The central connecting link in all this mathematics was a tower of nested algebras which Jones had discovered some years earlier in the course of proving a theorem which is known as the "Index Theorem".